Following the announcement in the Federal Register that certain areas are no longer in Moderate nonattainment and will soon be moved to Severe nonattainment specifically for Ozone, many manufacturers in this area may face new expectations, regulations, and standards in the coming year regarding their emissions. In the coming months, states in charge of these areas will submit new State Implementation Plans (SIPs) for reducing ground-level Ozone to comply with 2008 National Ambient Air Quality Standards (NAAQS).

While this may only pertain to certain areas, the 2015 standards are rapidly approaching their enforcement dates, lowering the levels of permissible 8-hour Ozone even lower (from 0.075 ppm to 0.070 ppm, with the emission statement rule and other definitions due August 2020). For more information, we welcome you to read the full Federal Register announcements of the 2015 Ozone NAAQS and reclassification of the seven nonattainment areas.

In our last blog, we discussed the process by which states submit implementation plans to the EPA. This article covered the Air Quality Management Cycle, attainment/nonattainment designation, and the groundwork states need to lay before a state can submit and the EPA can approve a plan. Today, we would like to turn our attention to the execution, discussing the components of a State Implementation Plan, the execution, enforcement, and what it may mean for your firm.

Related: The Global Cost of Air Pollution and the Health Benefits of Clean Air

Following the approval of a SIP, the plan becomes federally enforceable, allowing the state to monitor under new standards, issue pre-construction and operating permits for new sources, and enforce the regulations.

Depending on the severity of nonattainment, states must develop plans to achieve necessary levels of reductions and develop rules to enforce them.

This is a three-step process as part of the SIP. As severe or extreme nonattainment areas have more ground to cover, the levels of reduction will be steeper and timelines will be longer.

Rules, Requirements, and Timelines for Different Levels of Nonattainment (Ozone-Specific)

When rules are released, dates for execution are set. For ozone, the time to reach attainment ranges from 3 to 20 years, as defined under NAAQS. For example, the Extreme area attainment date for locations including San Joaquin Valley and Los Angeles South Coast are 2032 to attain the 2008 standard and 2013 for the 2015 Ozone NAAQS.

The image below shares the basics of planning for attainment, which we will discuss in greater detail below: 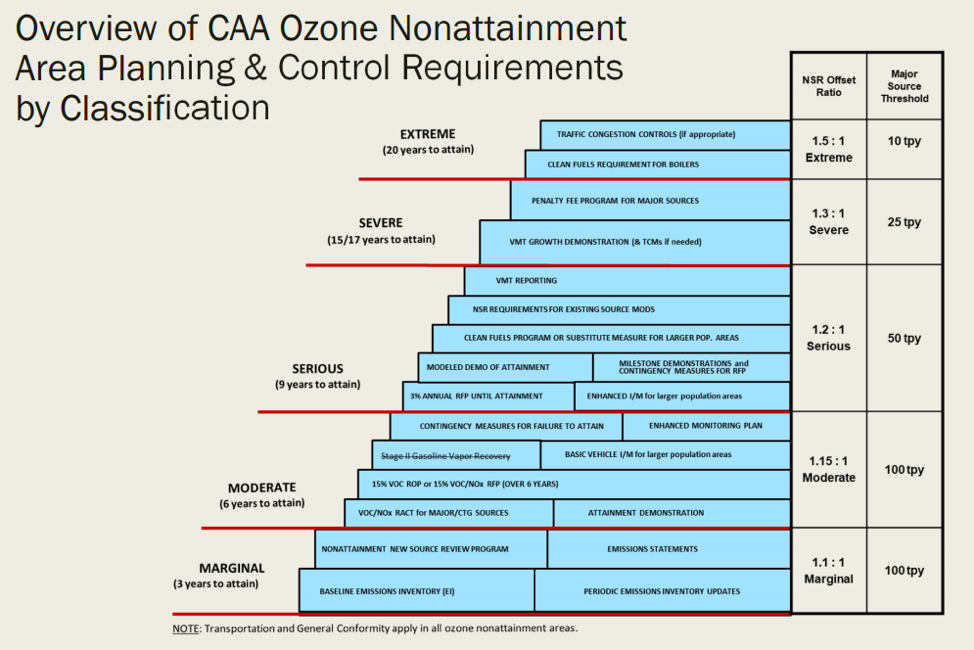 Knowing this, the reductions required and regulations imposed increase as well, as we discuss below:

The lowest level of nonattainment, those areas considered to have an area design value up to but not including 0.086 ppm (2008), with the limit for Marginal nonattainment dropping to 0.081 ppm under 2015 standard.

Requiring little more than consistent monitoring, those considered to be in marginal nonattainment are held to the following standards. Additionally, Title V major source permits and required emissions statements from these sources are only required for those facilities in excess of 100 tons per year (Note: recent changes to the Once-In, Always-In policy may give facilities previously labeled major sources more flexibility).

Under 2015 Ozone NAAQS, the marginal area attainment date is August 2021.

Moderate areas were to reach attainment for the 2008 Ozone NAAQS by July 2018 and are expected to meet the coming 2015 NAAQS by August 2024.

As seven areas were reclassified from moderate to serious in recent months, manufacturers will face new challenges in years to come as new SIPs are rolled out.

Areas classified under severe nonattainment are classified as Severe-15 or Severe-17, representing the expected timeline for attainment of 15 and 17 years, respectively. Notably, for these areas, the 1997 NAAQS attainment date is still in the future.

As noted, this is the first area where major stationary sources begin receiving penalties, while seeing the major source threshold once again halved to 25 tons per year.

Building, Expanding, or Modifying? Plan Ahead

State Implementation Plans, as explained in a presentation on the topic, are “enough paperwork to fill an 8×8 room from floor to ceiling.” Paired with the Clean Air Act’s 20,000+ page set of regulations, and it may feel like an impossible to climb mountain. At The CMM Group, we know what it takes to help you become and remain compliant under CAA rules and your unique state requirements, and we design the products you need to get there.

Whether you are working to remain compliant when expanding, find a solution that reduces operating costs while destroying pollutants, or prepare for new requirements set by your state in coming years, we’re here to help. Learn more about our work, download our guide to VOC abatement, and contact us for more information.

New to VOC Control Technology? Not Sure Where to Begin?

Request a quote below and let us know how we can assist you or provide more information on our VOC destruction systems.